I guess the heat took such a toll on us last week that we needed a vacation already! (Or our preceptors already had a weekend trip planned, so we tagged along). Either way, Steph and I made our way to Varkala Beach, which is a touristy town/beach in Kerela that is on the coast west of where ASSA is located. Last week finished up surprisingly well. On Thursday I had a chance to shadow my other preceptor who is working with the children in school. We saw four kids with a variety of issues affecting things like their ability to write, eat, walk, sit, etc. It was interesting even just getting a sense of the school day for some of the children here. One funny thing is that apparently there is someone who has been coming to the school with the initiative of creating inclusive classrooms, and they have a separate small room that is called “inclusion unit”. It is a bit contradictory, but my best guess is that maybe they are trying to work with the children independently to work on the skills needed to help them integrate into the classroom, but who knows, maybe inclusion means something different to them here. 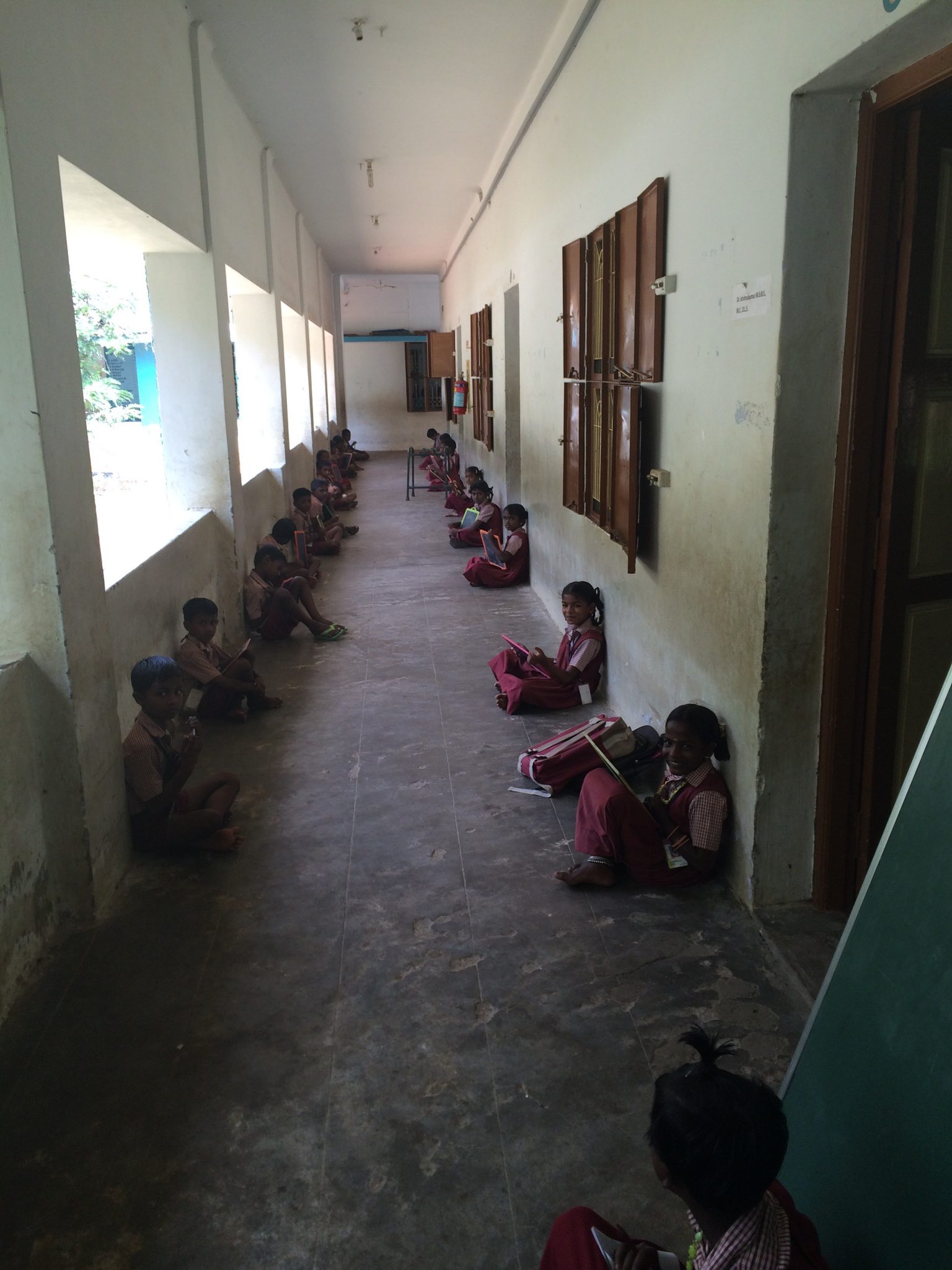 Friday both Steph and I were able to complete our scheduled appointments with our clients on schedule!! This was a shock as everything planned previously never seemed to go as planned. The morning was busy and full of one-on-one therapy with each of my three clients. I’ve realized that we may need to do some education for the PTs and support staff that are working in the SCI unit along with the clients. The way they transfer clients from bed to chair, and move them around is quite rough, and doesn’t always encourage the client to be as independent. This is important, because most of the goals for the clients I have spoke to involve them wanting to become more independent in transferring, eating, toileting, bathing, etc., but they receive so much help from the staff here. The help is amazing and everyone seems very well taken care of, but I’ve noticed it limits their opportunity to learn how to do things independently.

One of my tasks on Friday was to bring a wheelchair from the caliper unit (place where they build all the equipment since we can’t order it from a shiny catalogue), to one of the new clients so that he is able to move around on his own. First, let me point out that after taking all the usual measurements for a wheelchair, as we have been trained to do, we found out that you simply go to the caliper unit where they have donated wheelchairs that come in size small, medium, large and extra large, and they are not adjustable. So the only real measurement that mattered was the width of the seat, and then the rest will have to be adapted the best we can based on how it fits the client. Steph and I decided to propel ourselves through campus to bring the wheelchairs so we could gain a sense of what it was like learning to drive a wheelchair in this environment. Let’s just say we have a lot more appreciation for it now. We were dripping with sweat within seconds, and had to take multiple breaks along the way to rest. Although most of ASSA has paved paths throughout for this reason, there are still a number of bumps and inclines/declines, and it is a lot trickier to get over the bumps than we thought. The guys were very happy to have their own wheelchair so they can start learning how to use it.

We left Friday afternoon after placement was done to head to Varkala Beach, which ended up being just over a three hour drive on a windy and jerky drive through the mountains. There is only ever two lanes of traffic on the roads we have been on and people pass whenever they think they can make it, including on turns and with other smaller vehicles coming from the opposite way. So this means there is lots of slamming on breaks and honking the horn to navigate the road. Thankfully I have a fairly strong stomach, but I even had to close my eyes at times to prevent myself from feeling more nauseous. We saw some wild monkeys on our way which was fun, just sitting near the side of the road or running through the trees. I hadn’t researched Varkala Beach before hand since our preceptors planned the trip, and I am kind of happy I didn’t, because it meant that everything was new and unexpected when I saw it for the first time. The beach was really neat because it sits below a massive cliff. All along the cliff there are shops and restaurants on one side and then the cliff drops off on the other side of the path and the beach is below. We were only ever able to spend a couple hours on the beach because the heat was so intense, but I got to swim in a new body of water – the Arabian Sea! The water was so amazing, you got just a brief chill when you walked into the water, but then it was such a comfortable temperature to swim around in, I could have stayed in it all afternoon. In the late afternoon we were able to see dolphins swimming out just past where the waves broke, it was so neat! The cliff was great for people watching and for watching the dolphins and boats because you got such a great view from above. 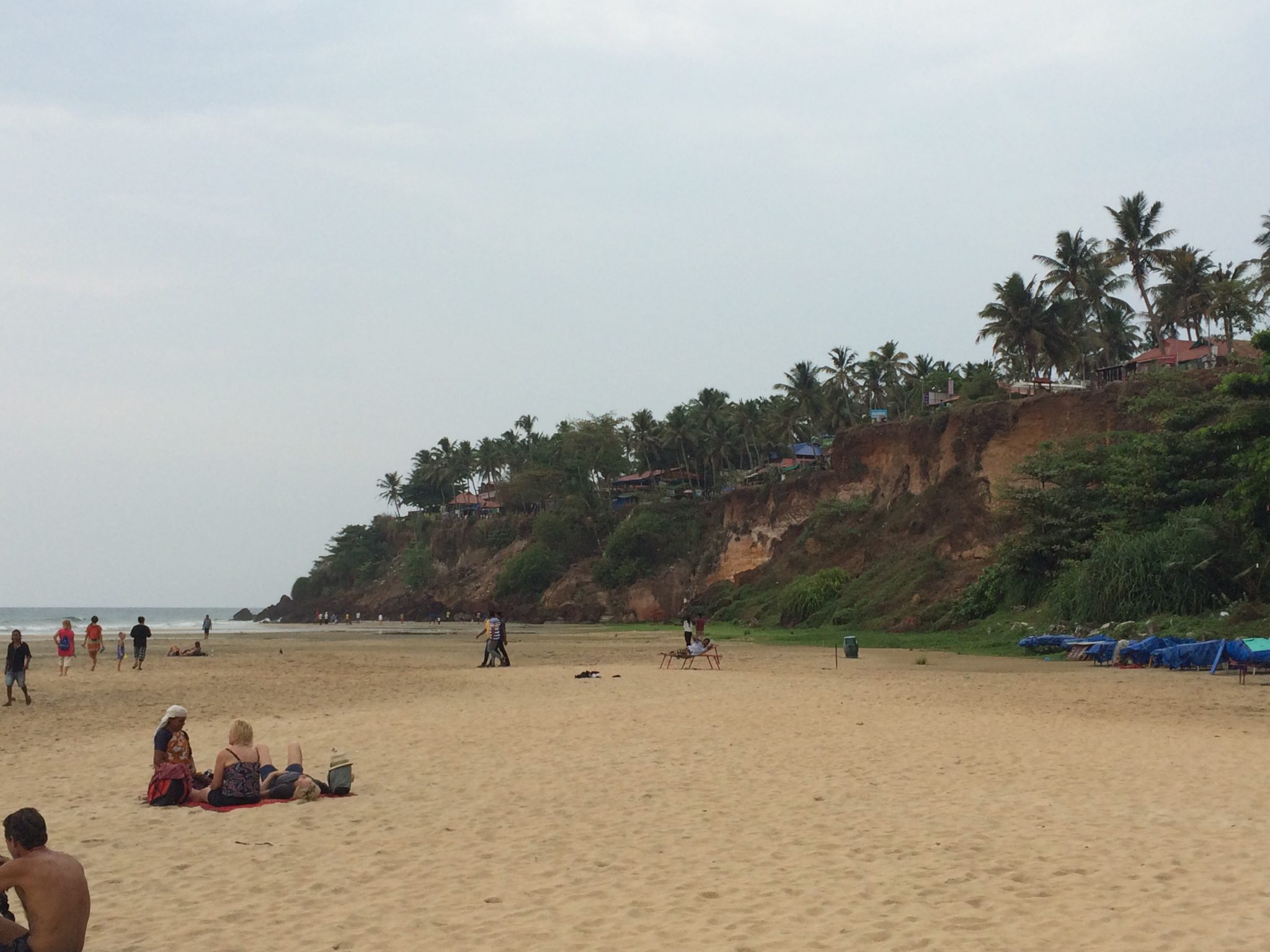 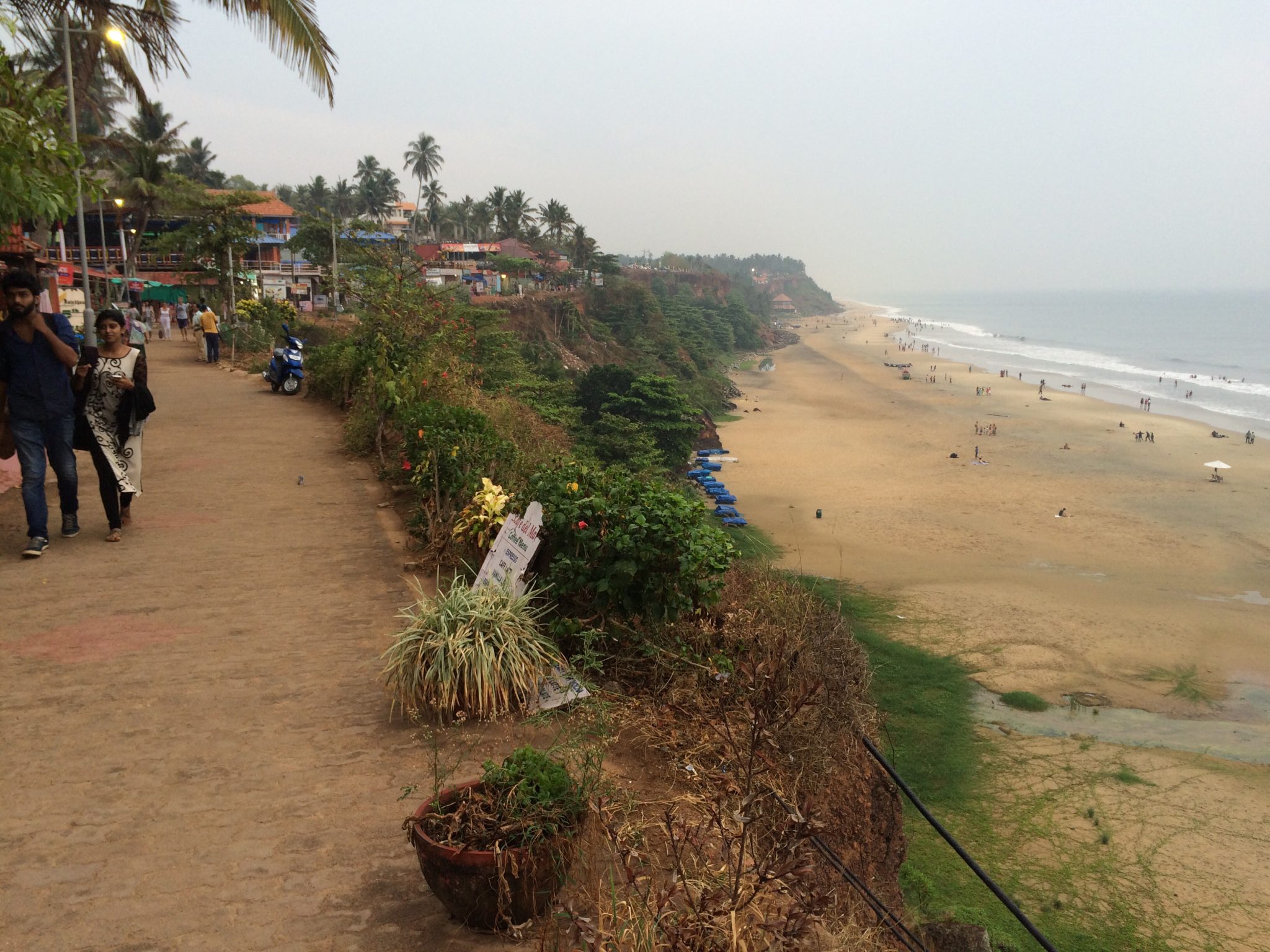 I quite enjoyed the local beach culture. We were told we could wear shorts/tank tops because this was a foreigners beach, so we wouldn’t feel uncomfortable, however, we gathered that we were entering in to low season for the foreign tourists which meant there was also quite a few more local Indian tourists. We got a few looks at times and lots of people asking for photo ops, we always said no, but we caught some people trying to do the stealthy selfie with us in the background. They don’t understand why we just lie out on the sand in the sun when it is so hot out. I had to explain to our driver that we do it because we want to make our skin tanned and darker and he seemed to find that pretty funny. Most of the Indian people we saw walking around were fully clothed and would swim in full clothing. We also observed how endearing the men can be towards each other here. You often see them walking around with their arms around each other or on each others shoulder. You even see them holding hands sometimes and swinging their arms along down the road or beach. It was really neat to see the different interactions between people, especially at the beach where it seemed like everyone was just letting loose and enjoying themselves. Most of the time it actually seems that men are much more touchy-feely with each other than the women are, which is generally different from home. We saw multiple groups of grown men running, chasing, and splashing around like children and having the greatest time, so I spent quite some time people watching and just enjoying the activity going on around me. 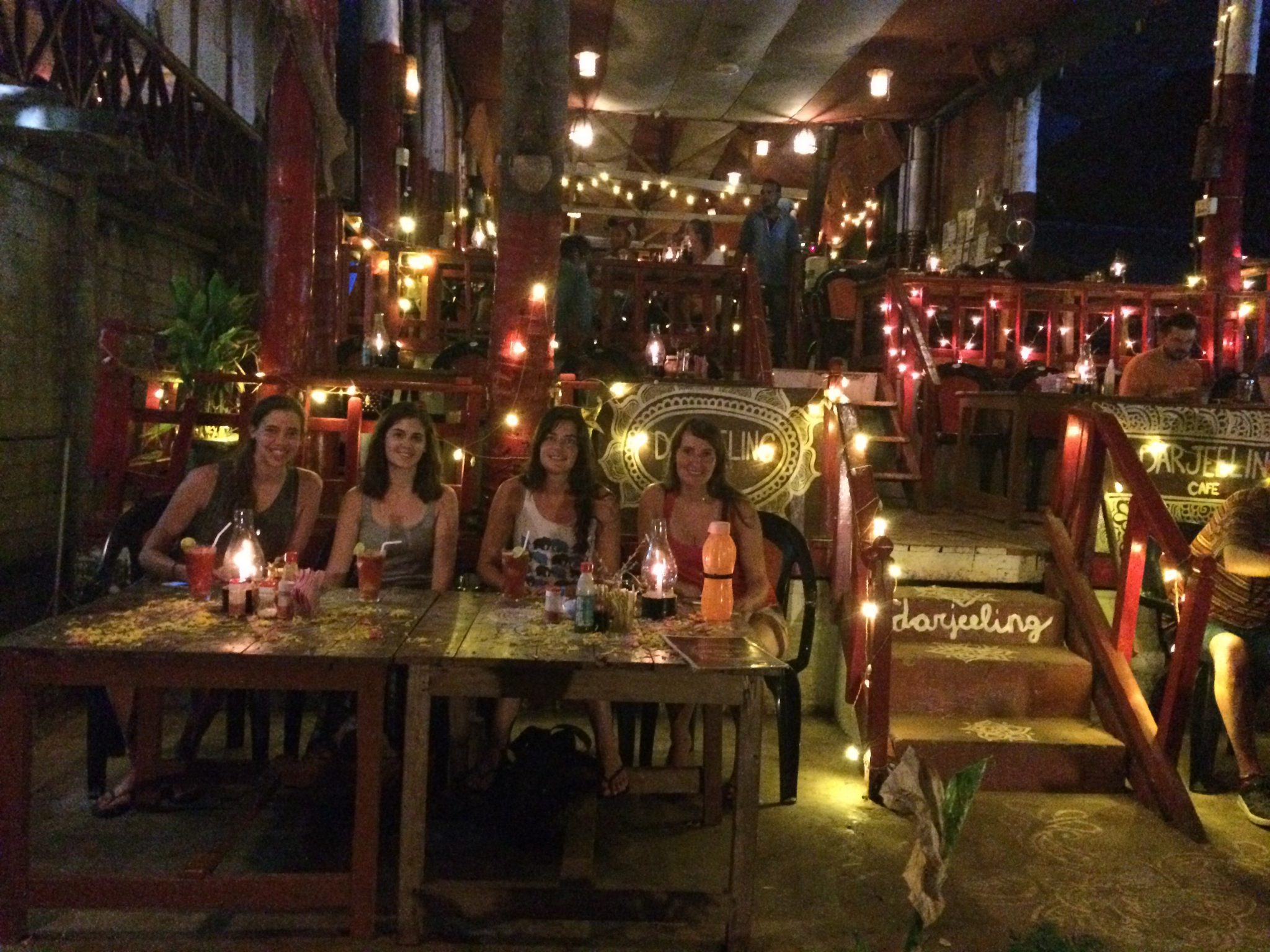 Theatre style seating at dinner looking out into the water

One of the small highlights for me while we were there were the cold drinks – trust me, it was exciting. Everything at ASSA is room temperature to warm, including the water we drink. There is no refrigeration here, and definitely no freezers, and all the meals we have here are hot. I took every chance I could while at the beach to order a cold juice or even just buy a cold bottle of water. I also ordered as many meals with meat as I could while I was there because everything at ASSA is vegetarian since many people don’t eat meat here. The restaurant signs you see around are funny because they will advertise that they have “veg. and non-veg.” Overall, the weekend was a perfect mixture of being able to sightsee and relax. Although some things were different such as being given cutlery at meals and speaking more English, everyone still seemed to be on IST (Indian Standard Time), meaning the meals took 2+ hours, allowing us to just sit and enjoy our time.

I have finished another day of placement now at ASSA and I am pooped. I think the weekend wore me out just from being in the sun so much. Therapy went well this morning, but I had to have a little nap this afternoon before doing paperwork so I would have enough energy to get through the day. I’ll give some more updates on the placement side of things soon 🙂