Wow what another couple days. They’ve been so busy I’ve barely had a chance to write anything! Yesterday was great because it was another day with the SCI unit. I forgot to mention before that it is all males, we aren’t sure exactly why, but that’s the case. And culturally that means we can’t do all aspects of therapy as we would in Canada. My newest client is a man who has had his injury for 10 years and has never had a wheelchair. We found out that it isn’t common practice in all parts of India for doctors to be aware of rehabilitation services and professions so they don’t all refer their clients to rehab, resulting in cases such as my client. He has spent the last 10 years primarily in a water bed sitting or lying with very few outings outside of the home. He was able to get by because he had help from family whenever he needed it, but is primarily here at ASSA to gain some independence because he has hopes of being married, having a family and working. He will learn how to use a wheelchair and how to become independent in more of his daily care activities. These are some of the opportunities that I truly value. I can’t imagine coming across a case in Canada where someone has had a spinal cord injury for so long without rehabilitation. In this instance, I don’t have to be an expert in the field to be able to support this client in reaching his goals, but the work he will do here at ASSA will have such an impact on his daily life.

I hope this video works, just a glimpse of the amazing adaptive equipment people create here.

Yesterday evening we made our first trip into town. It was a quick trip, and I don’t feel like I was able to fully take in all the sights and sounds, but thankfully I’ll have lots of time to return. We made having fresh coconut water and ice cream a priority after a busy start to the week. Then we went into a store to buy our first more traditional outfit. I would post a picture of it, but they sell the tops without the sleeves sewn in, so I have to make a trip to the tailoring department on campus before I can wear it!! The town we went to isn’t that big, but they have quite a large temple in the middle, and way up at the top of it there were a family of monkeys climbing around! Right in the middle of town with no trees in sight, it was pretty great. This picture doesn’t do the temple justice, but it’s the only one I have for the moment. 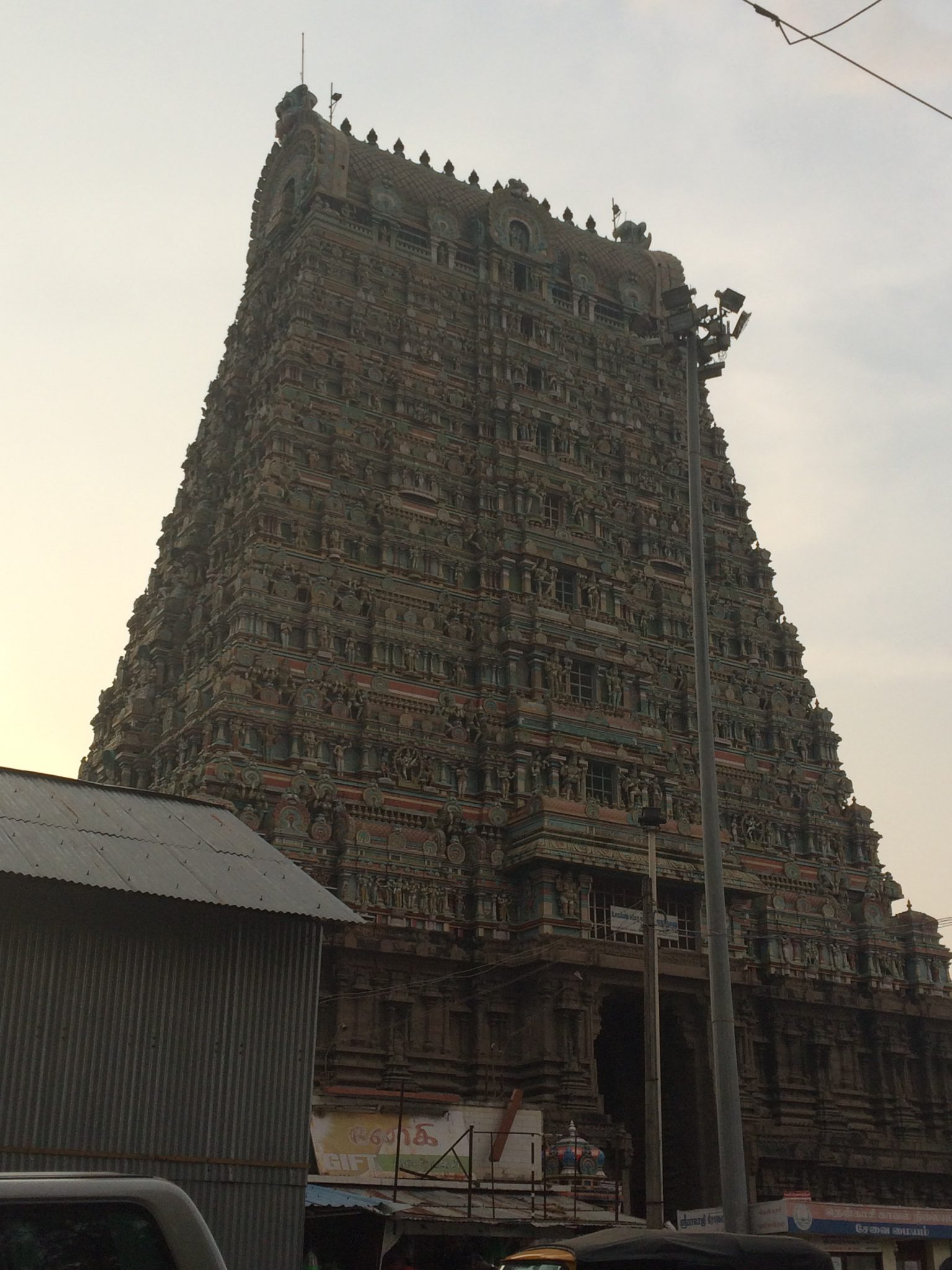 Temple in the town of Tenkasi

Our final stop was the fruit stand before heading home. We had a feast of fruit for dinner instead of eating in the canteen. It was nice to eat some fresh food as everything we usually have is cooked. We also had the strangest encounter when we returned to campus. It was after 8 and we had planned to stay in for these rest of the night until we got a mysterious knock on the door. We weren’t expecting anyone, but we know the campus is a safe place, so we answered the door. To make a log story short, it ended up being the founder (super important man around here) of ASSA who had come unannounced and seemed like he just wanted to introduce himself. He was very direct in his comments to us asking how many were here volunteering, for how long, were we enjoying our stay, etc. The best part about it all is that he remained in the car this whole time, and from my perspective I could only see his mouth and body. So I felt like I was in one of those movies where the all powerful character exists, but you never meet them or see their face. He asked if we had met the dr yet. Apparently he was also here at the SCI and he wanted us to meet him, so he said get in the car. Not wanting to offend anyone we got in the car, and at this point I’ve climbed in the trunk and can only see the back of his head – still a mystery man. He then drove us literally 45 seconds down the road to the SCI unit and introduced us to the dr. We got the same questions about how is Canada and how are we managing the heat. At this point the founder seems to be done with us, but not wanting to offend him again we stand around for about 30 minutes until we have been formally dismissed ( during this time period we have a short power outage which always induces an instant sweat, even at night). All we could do is walk back to our guest house and laugh at how the whole situation played out. The founder is quite an amazing man to have started this organization and older couldn’t thank him enough for the opportunity to volunteer and have our placement here.

Today was another great day. It was a bit different because normally on Wednesday and Thursday we will be in the villages working on the village based rehab project, but part of today was dedicated for preparing for our first outing next week. This meant the morning was free, so I had the opportunity to shadow Ana, our OT preceptor who is working in the out patient clinic on campus. All of her clients have had a stroke so we did lots of upper extremity treatment with the clients. One interesting thing about treating clients with a stroke here is that there is absolutely no focus on cognition. They only want rehab for the physical issues, whereas in Canada, cognition could play a huge role in the work an it does with the client. We still haven’t figured out the exact reason for why it isn’t addressed yet, but hopefully I will figure it out.

It was really neat working with the one lady because we were trying to figure out how to adapt a sari so she could put it on with one arm. The problem is you have two Canadians who know nothing about saris. Ana had spent a significant amount of time on YouTube just to figure out how a sari works before she could work on a way of adapting it. She figured it out with the help from some other woman who work here, and adaptations have already been made at the tailoring unit, so hopefully it will be a success at the next appointment with the client!

After placement today we took a walk in the tiny village right outside ASSA to get some snacks for games night. Every Wednesday is games night in the SCI unit – something previous volunteers started, and in true OT fashion we bribe them with food to encourage participation. The walk was a lot of fun and so was games night, but this blog post is getting pretty long and I’m ready for bed so I’ll share more details about the next games night and just post some pictures for now. 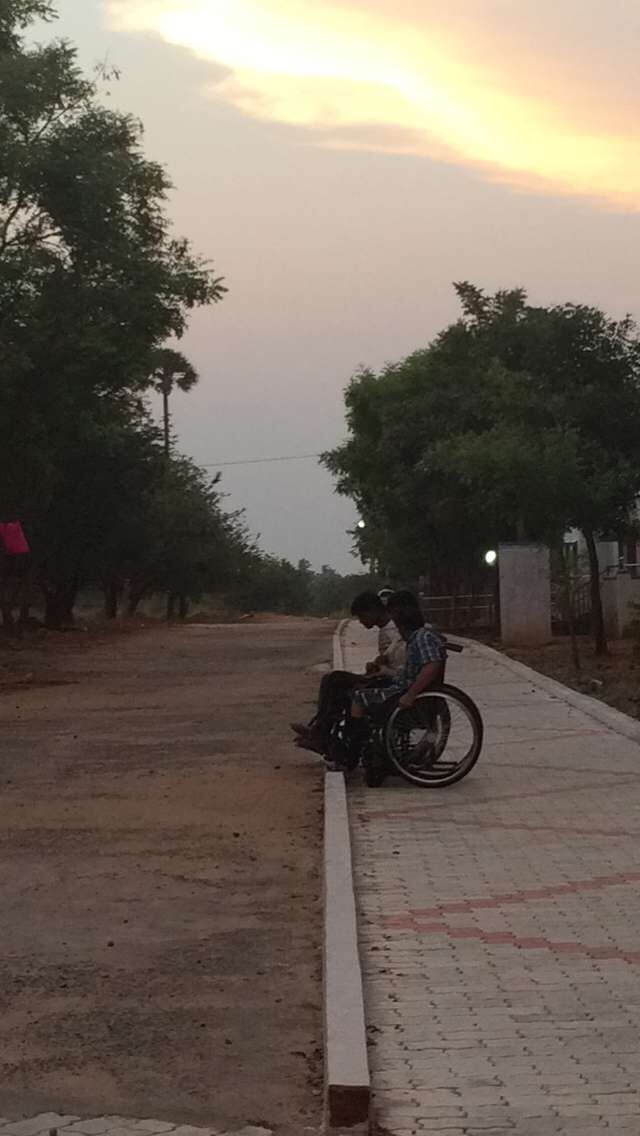 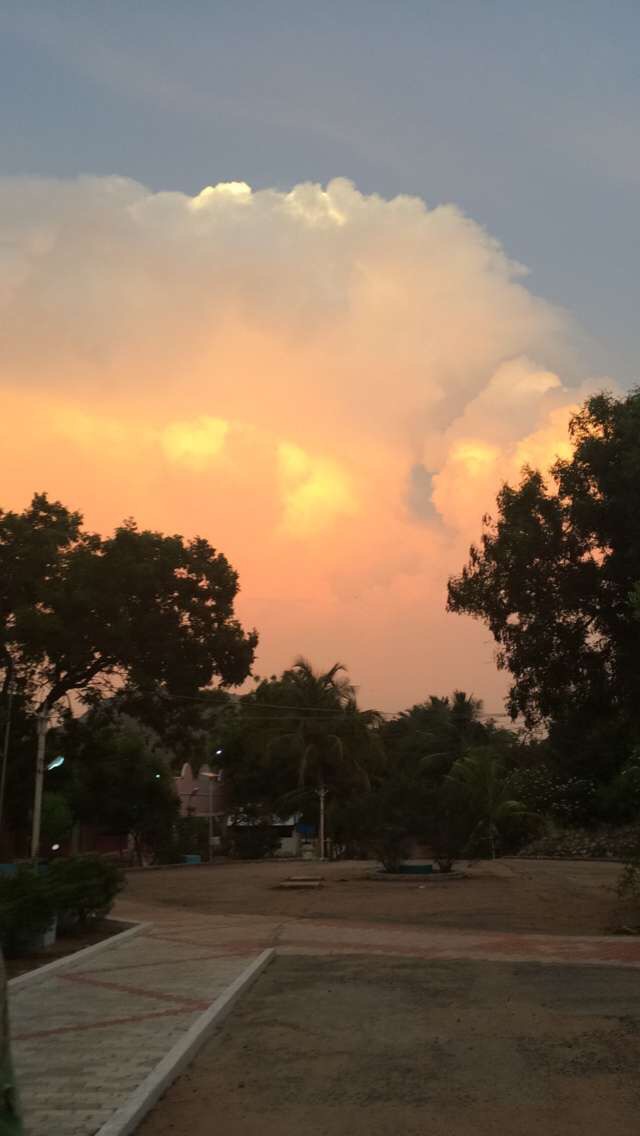 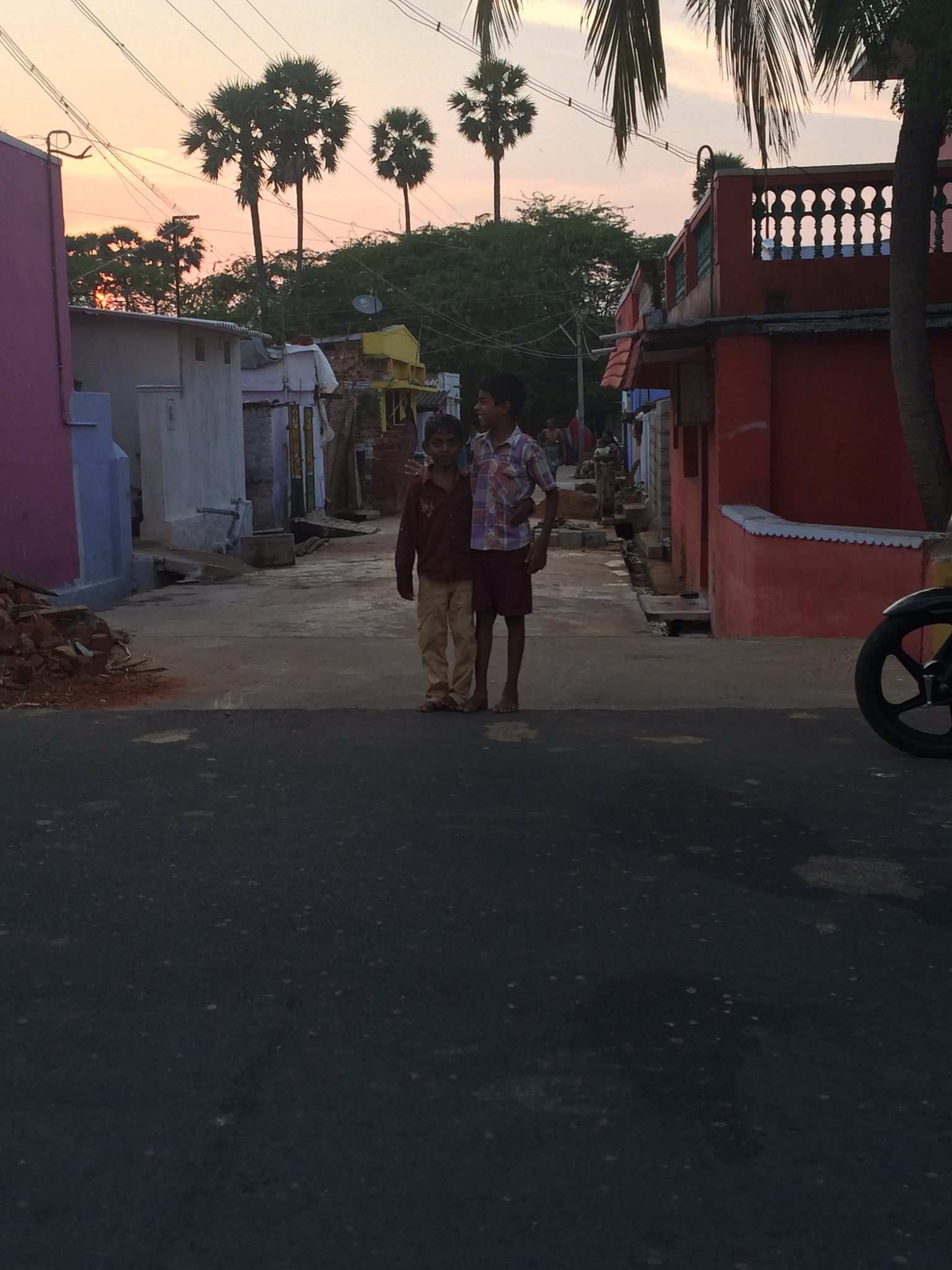 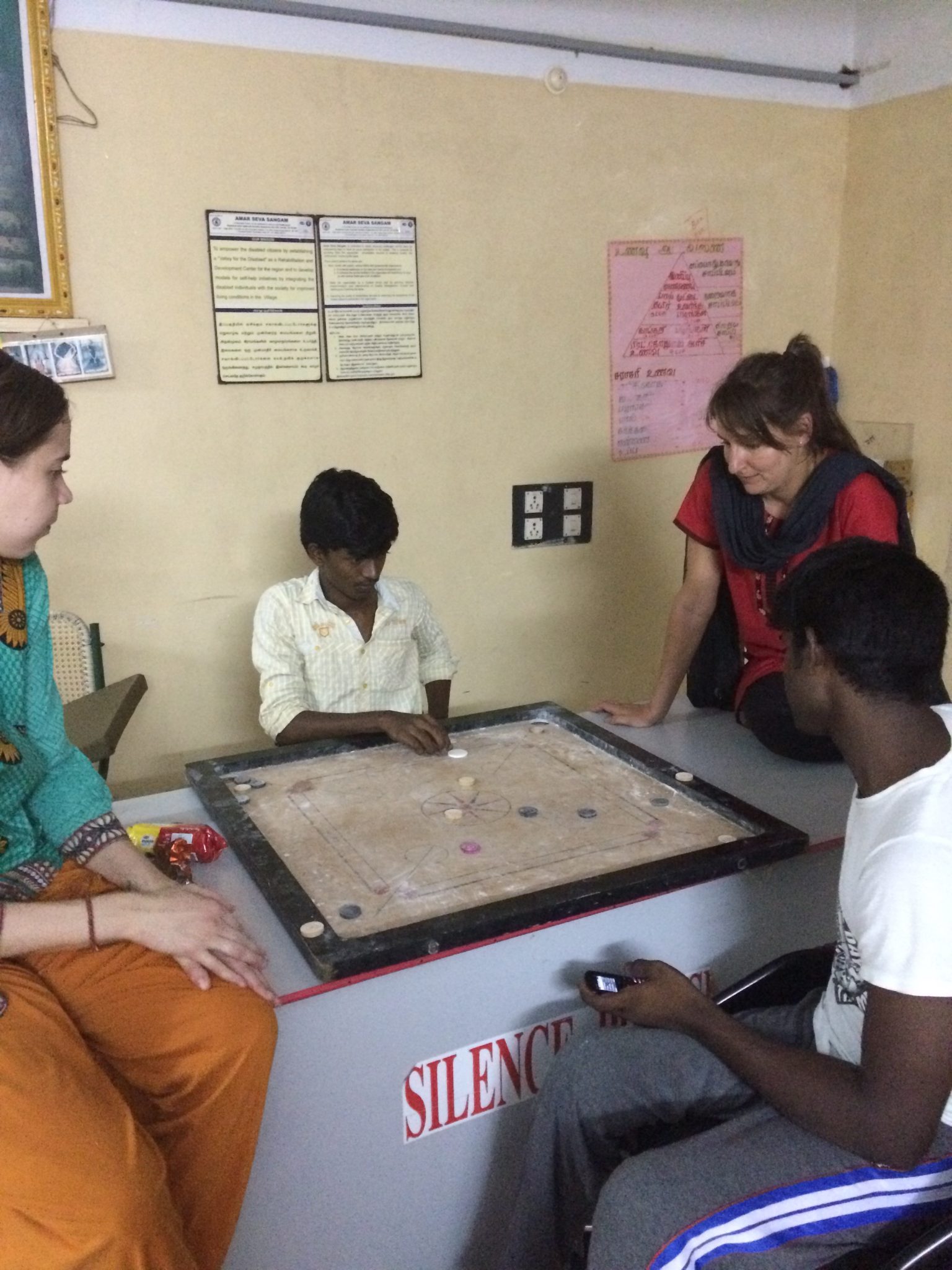 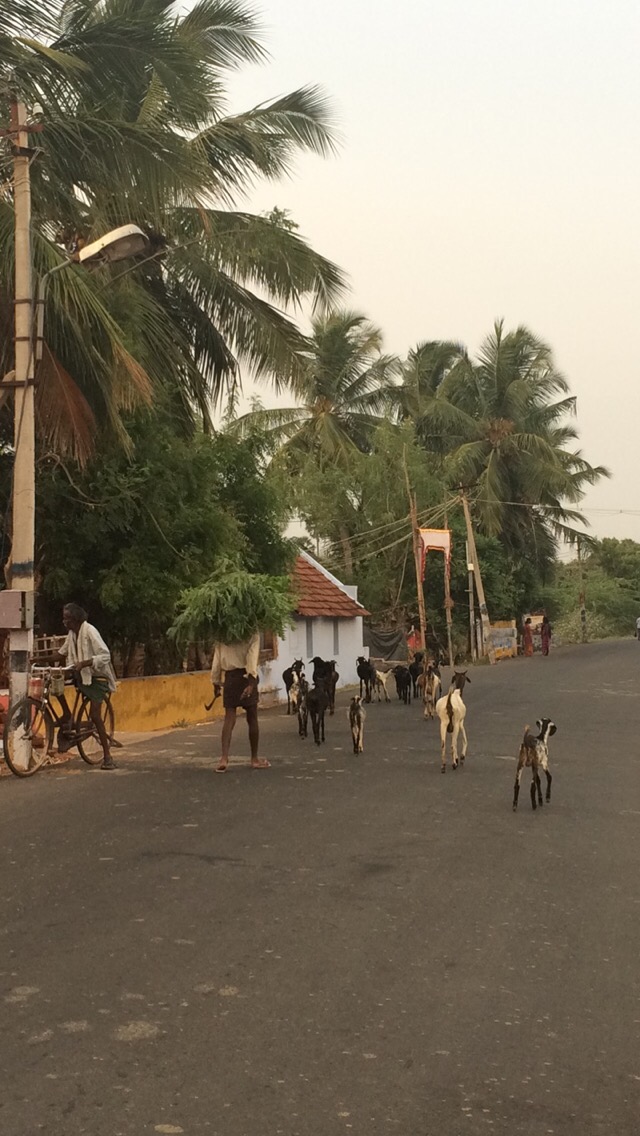