The first weekend in June we decided to go on another weekend trip. This time we were headed to the mountains as all of the trips up until this point were to the coast. Thekkady is a small tourist town located in the mountains near the border of Kerala and Tamil Nadu. We ended up just wondering around the touristy shops buying some things to take home with us on the Saturday, and then in the evening we went to a couple “cultural shows”. The first show was really neat – it was a demonstration of a traditional form of martial arts from the state of Kerala. The second show was really strange (unfortunately they didn’t allow pictures) – but it consisted of people dressed up in dramatic costume and make up as two of the Hindu Gods, and the “dance” included exaggerated face movements to help tell the story. 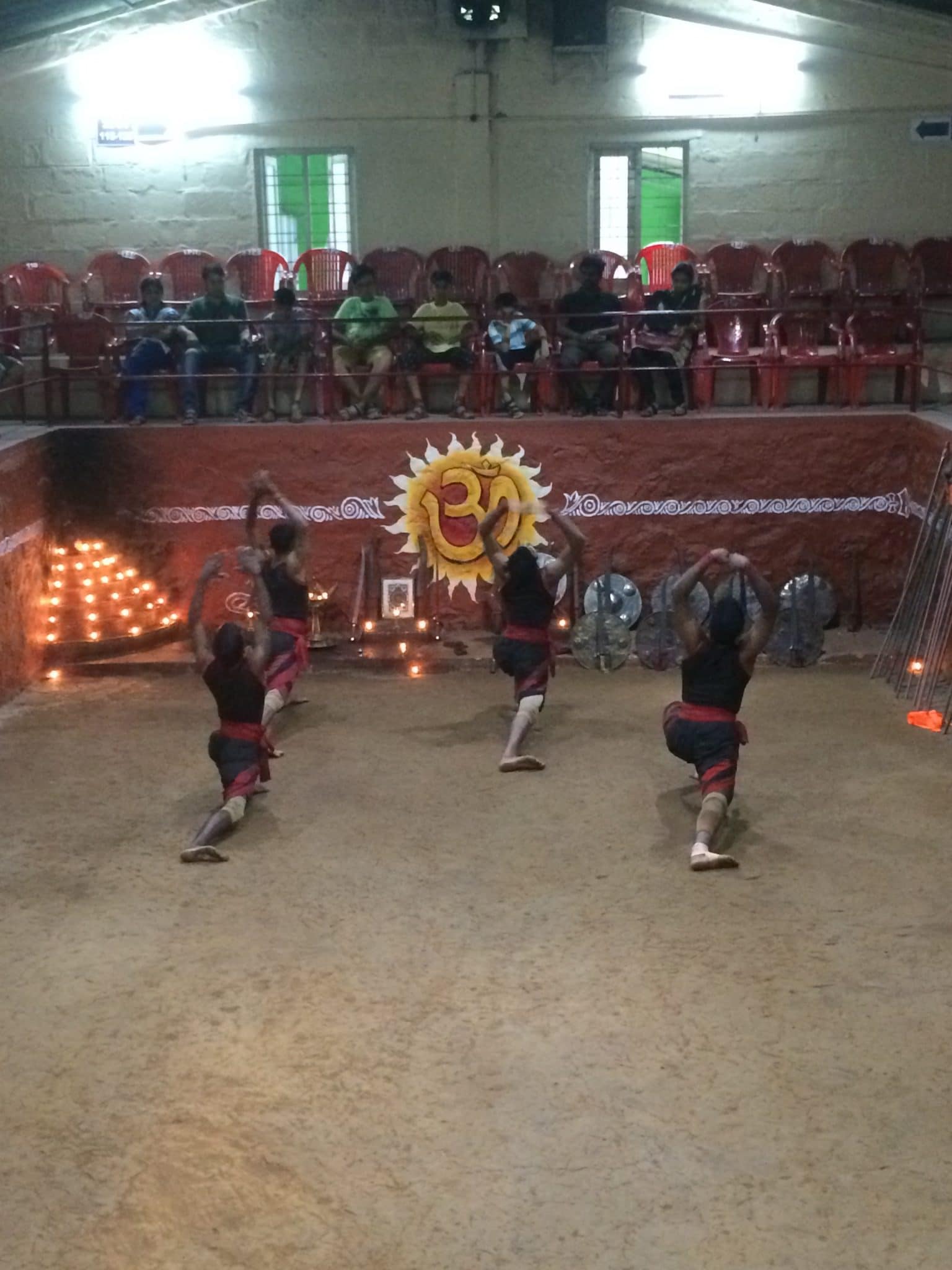 Kalaripayattu – a traditional martial art in the state of Kerala 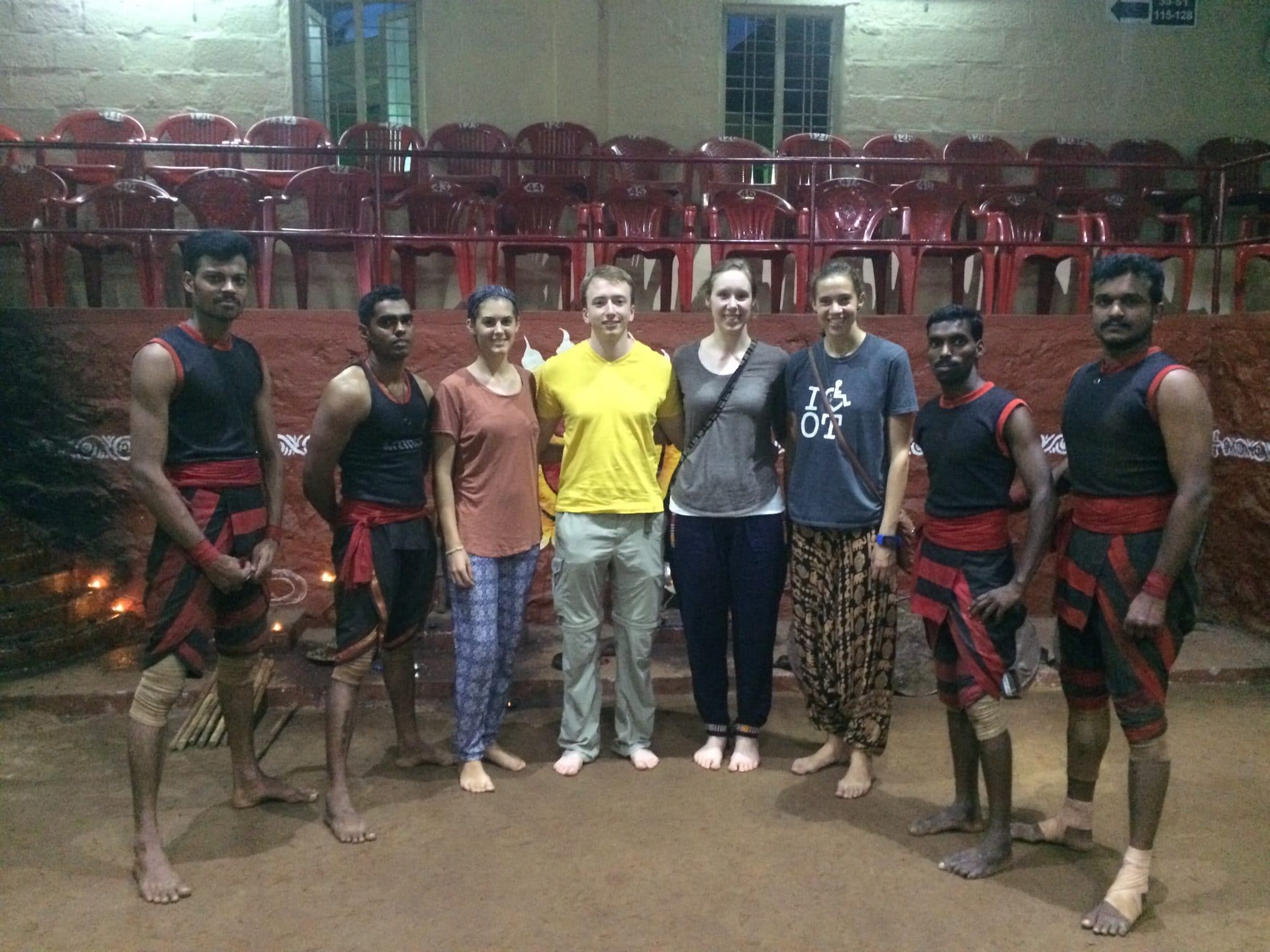 On the Sunday we had a full day hike planned in the mountains. I want to say that the hike was amazing, because the views from the top were fantastic…..but no one informed us of one major detail prior to booking the hike. First, I will say that when we arrived to meet our guide (because we were in a National park and a guide was required), they gave us these super stylish leg warmer type things. Only they had a full sock/foot at the bottom and then you tied them just above or below your knee. They didn’t inform us what these were for – they just asked us to put them on. It took about 30 minutes into the hike when we started to get into the forested part that we realized why we needed them… LEECHES!!! Ew, ew, ew. I am cringing just thinking back to the experience. I’m not a bug person at the best of times, but it is something I have learned to deal with through travelling. However, leeches are an exception. They just give me the creeps and are not something I ever want to come across. Well…we had literally hundreds of them crawling all over our feet and legs. At this point I was extremely happy for the “leg warmers” because they kept them off our skin, and if they started to crawl up our legs you could usually flick them off (with a stick in my case) before they got above the leg warmers. I wish I would have taken a picture of my feet/legs when they were covered in leeches to give a visual, but I don’t think I took one because I was too concerned about them getting on me. The leeches were only in the wet forested areas (which was a large portion of the hike), but thankfully we got some relief when we were in the sunny dry areas. At one point when we were close to a resting area, I just took off my shoes and leg warmers and walked bare foot, carrying my shoes with a long stick because I was too grossed out by them. 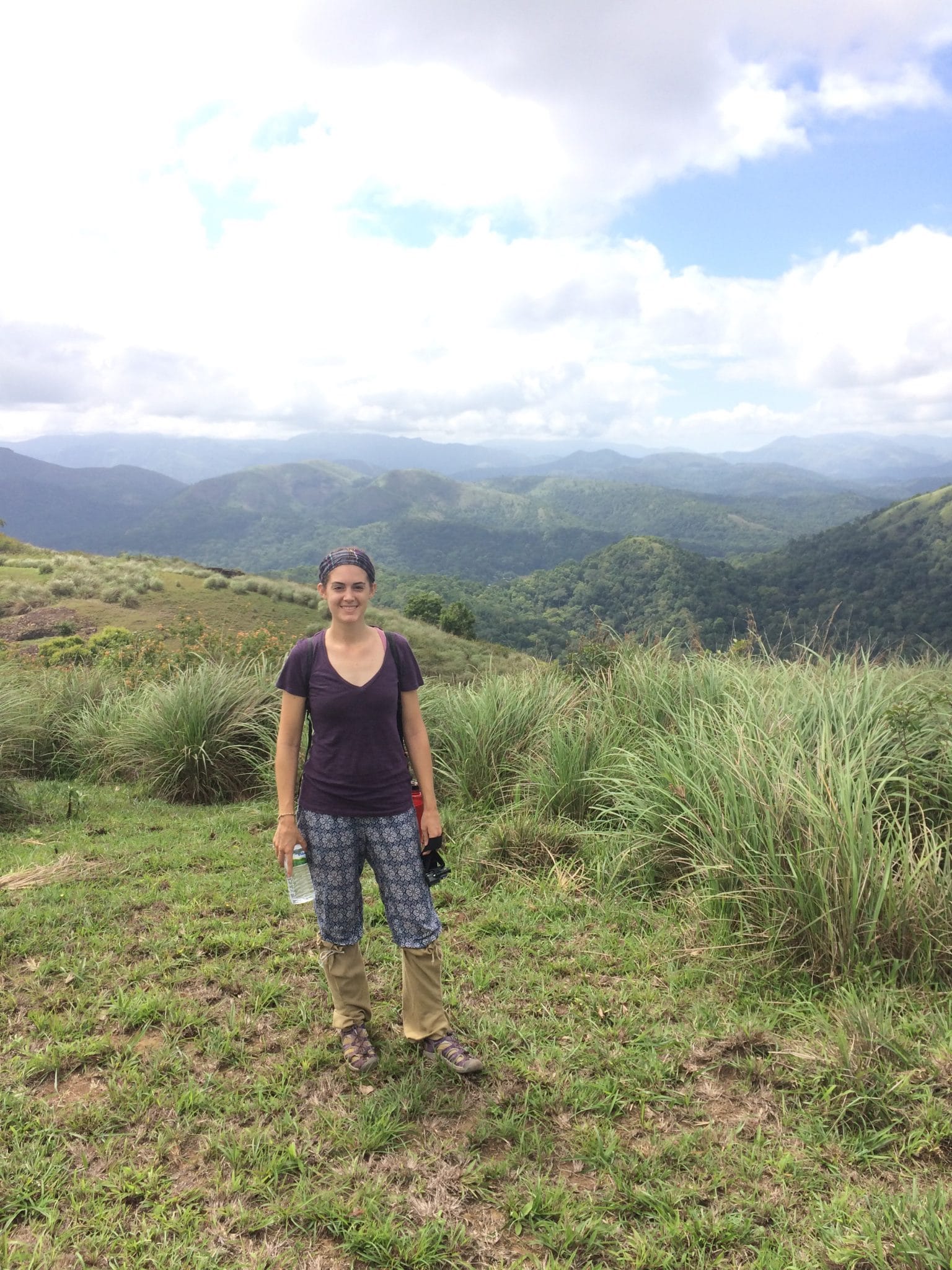 On top of the mountains with my sweet leg warmers

Apparently leeches are common in many hiking locations around India and the surrounding countries – I just didn’t do my research! I’m not even sure I can say that the views were worth it in the end. I am happy I did the hike and I don’t regret it, but I don’t think I could go through that again! Following the hike we had to get in the car and continue back to ASSA. 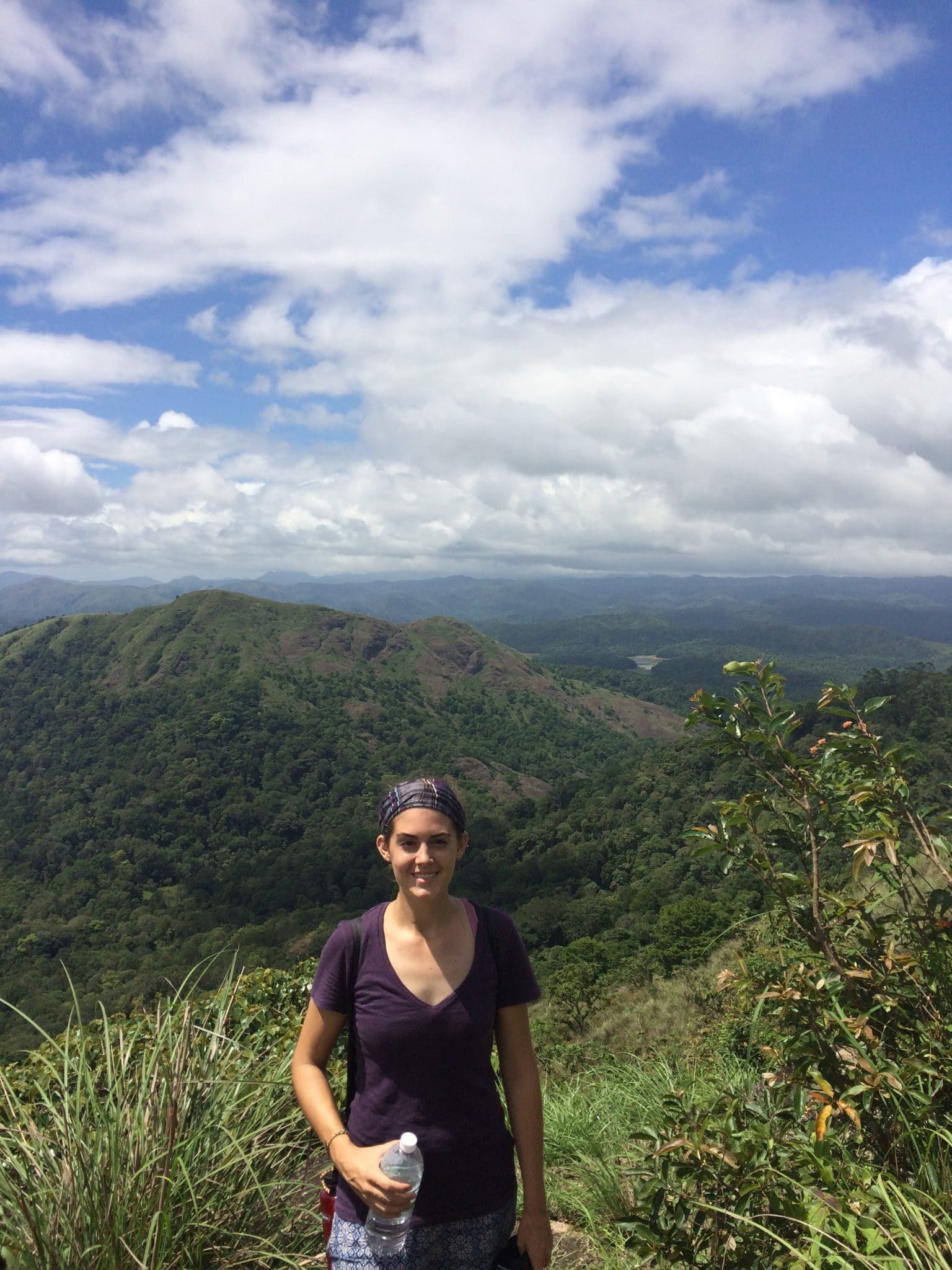 Views from the top – the lake in the background was our lunch spot. 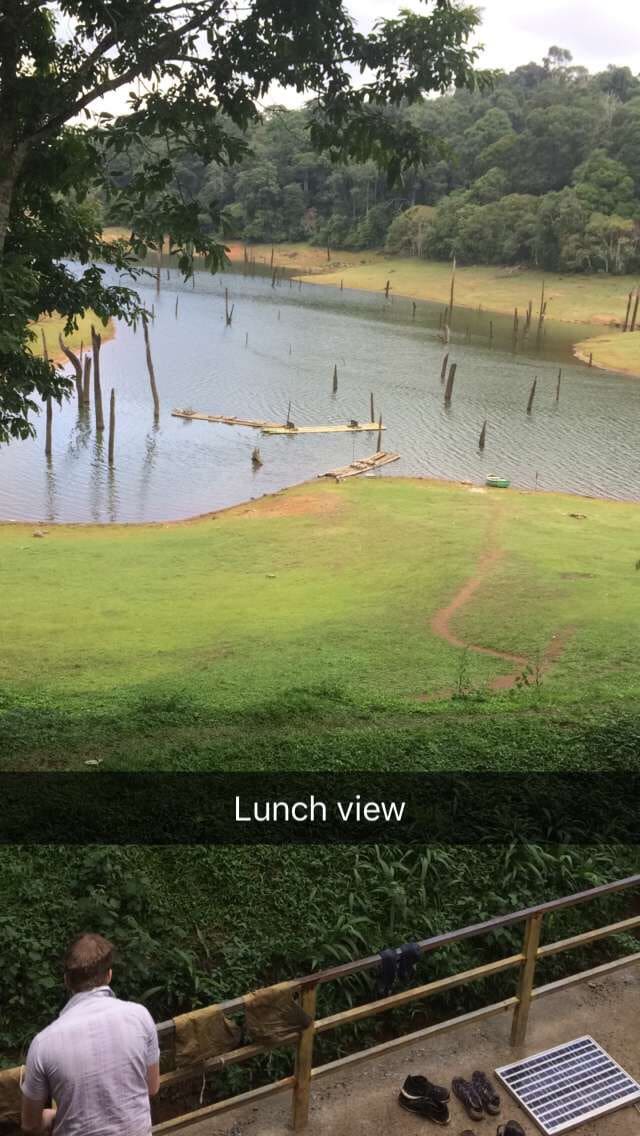 Although the weekend was enjoyable, I also was realizing that my time at ASSA was winding down, and weekend trips meant time away from people that I would be leaving in a few weeks. At this point Steph and I felt like we had taken enough weekends away to explore other parts of Tamil Nadu and the surrounding areas, and that we would want to spend the majority of our remaining time around ASSA with the amazing people we had met. As I have mentioned in a previous post (I think), returning to campus felt like coming home. It was an exciting feeling of returning to a place I felt comfortable in.