Today was the perfect mixture of work and fun. We had another day of placement in the villages this morning with only four children to visit. We are becoming more efficient with collecting information about the children and families on our visit, which is great, because they days continue to feel long and hot.

Today was fantastic because we were in a village that was having a yearly festival celebration (not entirely sure what about), but it basically involved everyone dressing in their fancier clothes and filling the streets celebrating. The main attraction was a massive mobile temple that was created and carried through the village kind of like a parade. In the front there were two figures dancing to music with all the children following and dancing along as well. Then there was the massive temple that was on four huge wheels attached to two chains. There must have been 30 people on each chain, pulling the “float” along. We got a fantastic view because the float went right by one of the education centres associated with VBR, so we went up the stairs to a little landing on the second floor to watch all the commotion going on on the street. The street was very narrow, so I felt as though I could have reached out and touched the people on the float as they went by, and since it was so tall we were at eye level as it passed by. It was great to see the village out having such a nice time, laughing and celebrating together. The education centre was even offering free buttermilk (a drink that is supposed to help cool you down on hot days) to anyone who passed by, bringing quite the crowd to our doorstep. As usual, the best way to explain what was going on is through pictures and videos (unfortunately amongst all the excitement I didn’t get a picture as the temple was approaching, just as it was passing), but here you go: 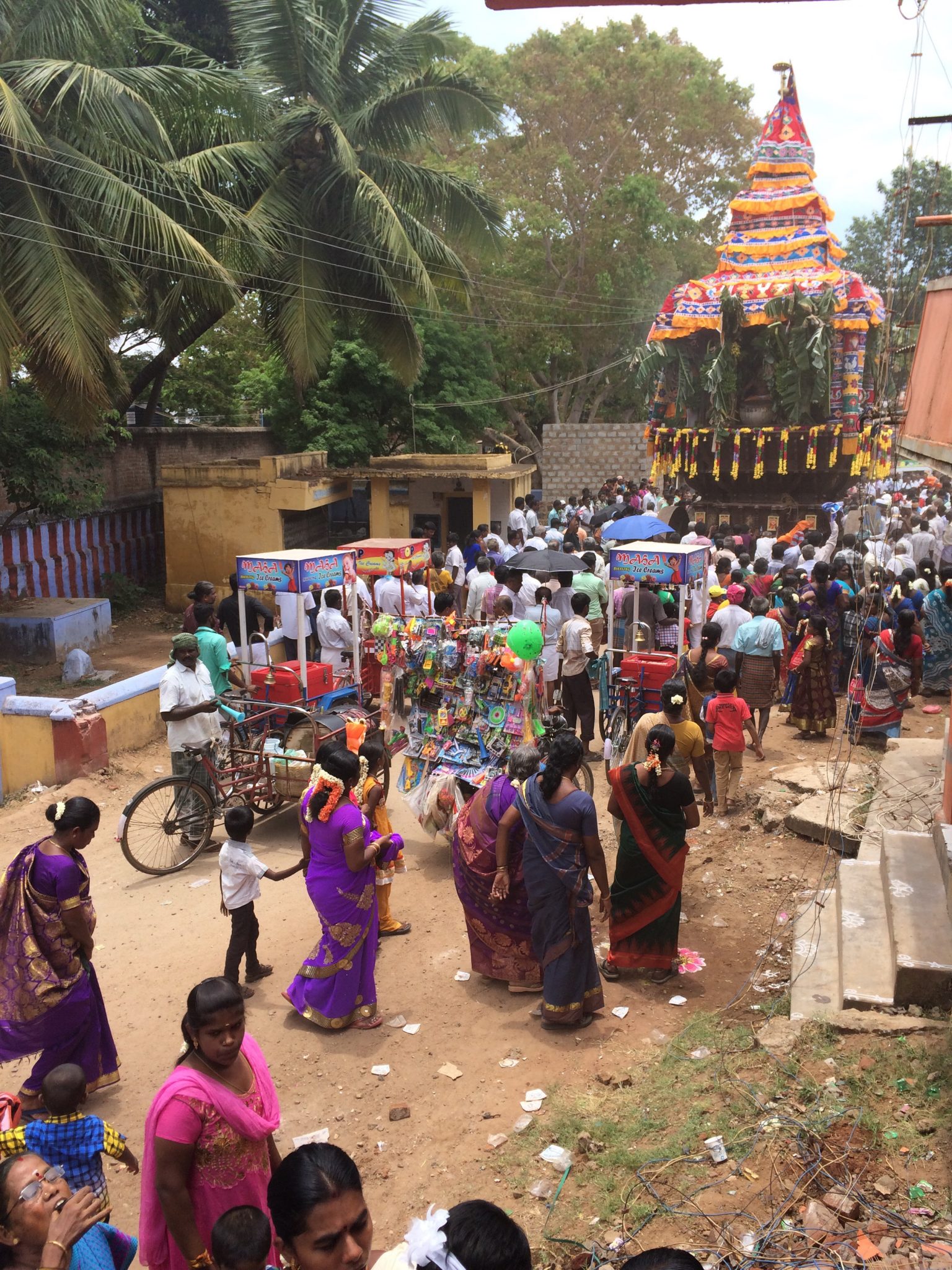 Back of the temple

We saw another child after the festival who was actually a joy to see. He seems to have a very supportive family who constantly interacts with him and works to encourage his development. Although the family didn’t have a lot of resources, they seemed to make good use of what they had and had some creative solutions such as a rolling walker type device that was the perfect size for the child to practice walking while supported by someone behind him. The family was just so hungry for information and advice that they could learn to help the child continue to learn and grow.

Just when we didn’t think the day could get any better, we returned to campus just in time to catch the end of lunch and indulge in another feast. We thought we were going to miss it from being in the villages all day, bit we finished early, and boy was it worth it. The food was amazing, as always and included some of our favourites. I really need to learn the names of the food so I can describe them better, but one of our favourites is some sort of deep fried onion, spices, and something else to hold them together. Feasts also usually include a dessert so we had some sweet mushy thing (sounds great, I know), but it was perfect to give us a little sugar kick after a tiring morning!

THEN the day gets even better. When we arrived back to campus earlier it looked like they were setting up for a cricket match, so after lunch we wandered back to the other end of campus to check things out because I have been wanting to watch any sort of cricket game, whether it was a pick up game or organized. Turns out that apparently today was the “male” sports day, so there were a number of teams created from staff members who were playing a mini tournament against each other, with the rest of the staff watching. Earlier they were other activities such as a sprint, and shot put (probably more as well, but that’s all I got through our broken English conversations). It was so great because we saw some of the staff from the SCI and VBR who are usually so business like running around and laughing like they are kids again.
I LOVED watching everyone let loose and have some fun, despite it being another hot afternoon. While watching, we learned that it was the “female” sports day the day before, and we missed it! That made me a bit sad because I would have loved to attempt to join in (even though I don’t have a clue about the rules), but I was thankful to catch the activities today! They also told us that tomorrow is supposed to be the sports day for all the kids with disabilities. Unfortunately we are scheduled to be in the village again so we will probably miss out :(, but fingers crossed we can make it back for at least part of it. We ended up watching the cricket games for at least an hour because it was just such a fun atmosphere. We are going to work on communicating with the staff that us “foreigners” want to be included in these types of things and that we wanted to feel more like part of the staff, rather than just foreigners who need to be treated differently from others. As a bonus, school was let out as we were watching the game, so I will include some pictures of the cute school kids in their uniforms as well, because they will never say no to pictures, especially “selfies”. (They have been added as their own post right after this one because it wasn’t working to post them in this one).